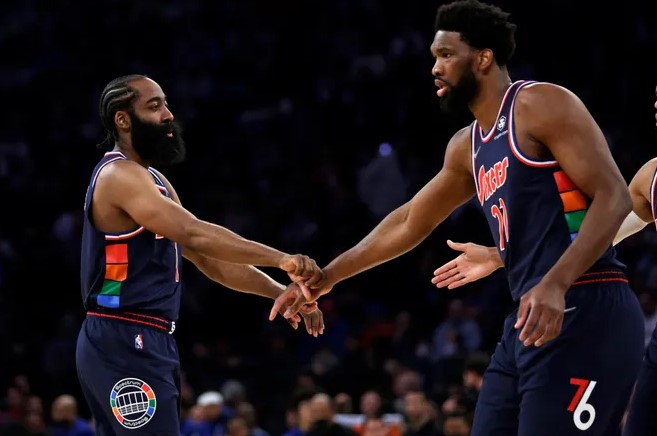 Pressure is an inherent part of postseason basketball. However, several marquee players enter the 2022 NBA playoffs with added pressure on their shoulders for a variety of reasons.

There are veteran stars carrying the weight of past playoff failures and embarrassing exits. There are young stars looking to make overdue playoff breakthroughs. There is an all-time great whose window to win an elusive championship could be nearing its end.

Who will be able to withstand the stress?

Ahead of this weekend’s first-round series openers, we dive into the playoff pressure cooker. While some are playing with house money, here are nine stars facing the most pressure in the 2022 NBA playoffs:

When the Sixers acquired Harden for Ben Simmons in a trade deadline deal, it was with the idea that Harden would help the Sixers win a title. While his averages in 21 games with the Sixers (14-7) have been fine (21 points, 10.5 assists, 7.1 rebounds per game), he shot just 40.2% from the field and 32.6% on 3-pointers. Harden’s playoff struggles are well documented, including a 2-for-13 3-point shooting performance against Golden State in Game 7 of the 2018 Western Conference finals with the Rockets failing to capitalize on a 3-2 series lead. That was also the last time Harden reached the conference finals. There’s a lot riding on Harden’s performance.

Embiid believes he is the best player in the NBA. It’s time for him to prove it and get the Sixers to at least the Eastern Conference finals. Starting with the 2018 playoffs, Embiid has lost in the second round three times and the first round once. Embiid needs to take his solid player scoring, rebounding and assists averages and turn them into at least 12 playoff victories.

Irving missed 53 games, most of them because he was unvaccinated and not permitted to play in games in New York because of the city’s vaccine mandate. With the vaccine mandate for athletes and performers dropped, Irving can now play at home. The Nets were 14-15 with Irving and 12-6, including Tuesday’s play-in game, when Irving and Kevin Durant both played. Irving’s absence, and part-time availability, impacted the Nets in the standings and seeding. Can he make amends?

The Utah Jazz have been a really good regular-season team that past six seasons and an underwhelming playoff team with three first-round series wins in five previous playoff appearances. With the best record in the league last season, the Jazz lost to the Clippers in six games in the conference semifinals. Just because the Jazz are a quiet fifth seed, it doesn’t mean there isn’t pressure on Donovan and Gobert to avoid a first-round loss and the potential for significant roster changes.

Paul is headed to the Hall of Fame regardless if he wins a title. But he wants a ring, and this might be his last best chance to do so — with this Suns team that won a league-best 64 games this season coming off a 2021 NBA Finals appearance. That was his first Finals appearance after falling short in his only other previous conference finals appearance in 2018.

Doncic has yet to win a playoff series. He’s been close — losing to the Los Angeles Clippers in six games in 2020 and to the Clippers in seven games last season. His attempt to win a playoff series this season is complicated by a strained left calf sustained in the final regular-season game against San Antonio on Sunday. There is no timetable for his return. He’s still young, just 23, but he needs to breakthrough at some point.

Butler has played in one Eastern Conference final — two seasons ago in the bubble in Orlando and has restored hope that the Heat can again win an NBA title. Being the No. 1 seed, the Heat face pressure, and in turn, Butler assumes a great deal of responsibility for the Heat’s play. There was the in-game dustup between Butler and Heat coach Erik Spoelstra, and to put that incident to rest and shoot down any talk of Butler wanting out, a deep playoff run is necessary.

Just 24 years old, Tatum has reached two conference finals, losing to Cleveland in 2018 and Miami in 2020. He could finish in the top-five in MVP voting this season, signaling his official rise to one of the game’s best players. There might not be as much pressure on him as other players on this list, but given the way the Celtics played the final two-thirds of the season, finishing with 51 wins, expectations are high for Tatum and the Celtics.